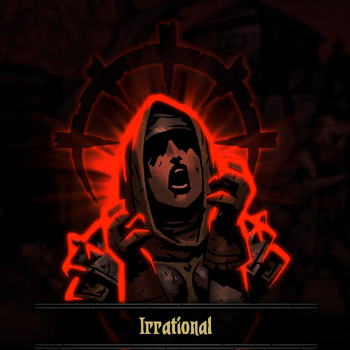 An Affliction is one of the states a hero can enter upon reaching 100 stress, the other being a Virtue. Afflicted heroes will suffer severe stat penalties, and have a chance to be able to act on their own at the start of their turn. This action ranges from a random skill, to moving forward or backward, to passing a turn altogether. Afflicted heroes will also comment on actions during combat, causing stress to the party when they or an ally are attacked, or when an ally attacks. Out of combat, they may interact with curios, refuse to use camping skills, or even refuse to eat during a camping meal.

Afflictions can be cured in Town by sending the hero to receive one of the stress relief options from the Abbey or Tavern, or by waiting until they passively reach 0 stress. Afflictions can also be cured within a dungeon, by reducing the Afflicted hero's stress to 0 during an expedition.

All Afflictions (except Rapturous) lower Stun, Blight, Bleed, Disease, Debuff, Move, and Trap Resist by 15%, and reduce MAX HP by 10%. Since these are shared attributes, they are not listed in the table below.

Possible forced actions on the start of a hero's turn, called "act-outs," cannot happen two times in a row for the same hero, and two different heroes cannot have act-outs occur back-to-back. Only one possible action will be chosen, and is not rolled individually relative to other actions; e.g. for Fearful, there is a ~68.5% chance to have no special effect, and ~31.5% to have a forced action, which will be one of the three available options. Act-outs will not end a hero's turn (except for random actions and passing).

All comments and act-out barks will give 6 stress to the whole party (if the Afflicted hero was attacked, or if the bark is caused by an act-out), or to a single ally (if the comment was triggered by them attacking or them being attacked).

An important thing to note is that Afflicted heroes that refuse to use or be the target of camping skills will still use the Respite points of the camping skill.

Self-attacks will always deal 10% of the hero's MAX HP, but will have no other effect.

Friendly attacks during act-outs have unique traits associated with them compared to other abilities. Each class's act-out attack will deal a different amount of damage, which is measured as a percentage of the target's MAX HP. Additionally, most heroes will inflict an effect, ranging from debuffs to blight to marks.

Heroes with the Refracted

Affliction will override any effects, and instead inflict

Horror 5. They will still deal the same amount of damage as a normal Affliction.

A hero's chance to get a specific Affliction is influenced by which ones they have received before, known as their Affliction History. Every Affliction starts with a base weight value of 4 (except for Refracted

, which has a base weight of 3), for an equal chance to be obtained (14.2%, or 12.9% if Refracted is available). Whenever a hero becomes Afflicted, the weight to obtain that Affliction (e.g. Hopeless, Irrational, Abusive) increases by 2 (the percentage rising by approximately 4%-5% with diminishing returns for every subsequent addition). This continues indefinitely as long as heroes continue to gain Afflictions or Virtues.

You can increase the chance of multiple Afflictions: if a hero becomes Hopeless twice and Masochistic once, those now have total weights of 8 (23.5%) and 6 (17.6%) respectively.

The chance to get a Virtue over an Affliction (base 25%) is independent and is determined before Affliction History is taken into account. Virtues also have a base weight of 4, but increment by 1 rather than 2 when obtained.