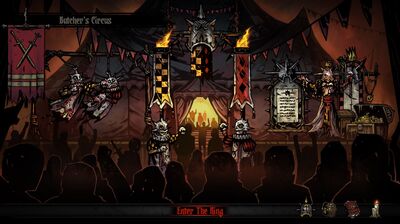 The Butcher's Circus is a location added in The Butcher's Circus DLC.[1] It is separate from single-player content, and has little impact on the player's save file. The player gains access to the Butcher's Circus either from the main menu, or from accessing it from the Hamlet while they are playing a save file with that DLC enabled. This feature is currently exclusively online; offline functionality and bots are an expected addition in future updates.

At the Butcher's Circus, the player can partake in player-versus-player battles for glory and prestige. A lot of the single-player mechanics have been rebalanced and standardized to even out the playing field; this includes a standardized pool of "Ringmaster" Trinkets exclusive to this mode made available for all players. 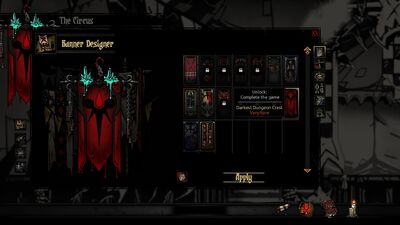 The player can customize their banner, which is displayed during the matchmaking loading screen. They start off with a basic setup, and can unlock more banner parts as they progress through the Prestige levels. Other parts can also be earned through achievements or objectives like killing bosses; entering the Butcher's Circus from a save file with those objectives already accomplished will unlock those parts immediately. 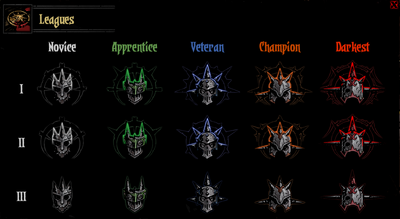 Victories against other players in the Butcher's Circus earns skulls for the player, and losses will cause the player to lose skulls. A flawless victory may yield more than one skull; a crushing defeat may lead to loss of multiple skulls. After the player has earned enough skulls, they advance up the ranks, and the game will match them against better opponents. Higher leagues will require more skulls to advance. Losing all of the skulls will cause the player's rank to downgrade, but a player cannot go down a league (e.g. Veteran to Apprentice) from losing. The player begins in Novice III; the max rank is Darkest I. Reaching higher leagues will award the player banner parts to display their achievements.

Fighting your way through the Butcher's Circus lets you earn Prestige. Your Prestige level is separate from your rank and does not decrease at all. Earning Prestige lets you unlock more Trinkets to use for your party, and at certain milestones adds Banner parts to show off your achievements. You can view future Prestige Rewards in the Prize Box.

Completing a battle will net you Prestige. If you are victorious, you get 15 Prestige, with 1 less for each of your heroes that died in battle. If you were defeated, you get 8 Prestige, with 1 bonus for each enemy you've slain in the process. As Prestige can still be earned from the combat tutorial, you can repeatedly fight the tutorial to test new teams, raise your Prestige level, and slowly unlock new trinkets at higher levels.

The maximum Prestige level is 75. After obtaining your final Ringmaster Trinket at level 69, the requirements to advance to the final Prestige levels will dramatically increase. 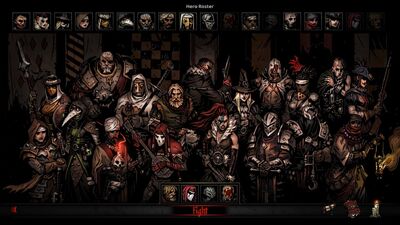 Before you begin, you have to set your party up. Left-clicking a hero portrait from the top lets you choose their skill loadout and pick their Trinkets. Right-clicking brings up a more detailed information window displaying their resistances.

Clicking the plus sign just above your party display (added 29 Jul 2020)[2] opens the party builder, which lets you save your current party (and their skills and Trinkets) and name them. You can store up to five separate parties and load them up for a convenient switching of strategies.

The skull on the toolbar at the bottom of the screen lets you re-play the combat tutorial, after you've first completed it. You can earn Prestige, unlock Trinkets and banner parts, and progress achievements while re-fighting the tutorial. 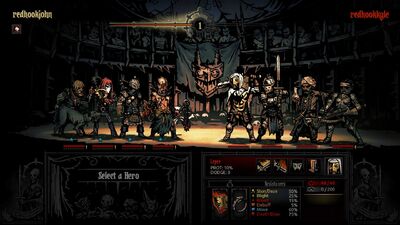 The Butcher's Circus has drastic differences in combat from the base game, beyond the fact that you are fighting against other players instead of AI-controlled monsters; turn order has changed to be less random, and heroes are reworked to provide balance.

Instead of a dice roll to determine turn order, there will be a coin toss that determines which player will go first. The winner of the coin toss gets to choose which hero acts first, while the loser gains a team-wide +15 DODGE buff for the entirety of the first round. The player now has control over which hero they want to make an action. Clicking on their hero will simply display their information - clicking and holding for long enough will allow the player to assume control.

After the chosen hero acts, the play passes to the other player and they get to choose which hero acts. This continues until all remaining heroes have acted, then a new round will begin.[3] The player who won the coin toss always acts first, but as Heroes are slain, the player with fewer Heroes may begin getting the first turn.

Slain heroes will leave corpses, rather than disappear from combat after being slain. This allows the player to maintain some semblance of their original party formations, and reminds them of the horror that the Circus brings.

Stress is introduced into the Circus as a unique way of slaying opponents. Due to the strength of the healing abilities provided by the Vestal, Occultist, Crusader and Flagellant, players will need to pay special attention to the Stress mechanic in order to escalate battles. Heroes can still inflict stress through critical hits, but some abilities are designed to always induce Stress.

Stuns are still powerful in the Circus, but still grant a 50% stun resist to the target after their turn has been skipped. Dazes, on the other hand, are a new status effect that works somewhat similarly. Dazing a hero will force them to act after all non-dazed heroes, effectively forcing players to choose them last in a round. If a hero is Dazed after they have already acted in a round, they will still be forced to go last in the next round. Both Daze and Stun use the target's Stun resistance to check if they get resisted, and wear off after the target takes their turn. Several skills that used to Stun in the main game now instead inflict Daze to reduce the ubiquity of this ailment.

Many of the heroes' abilities and stats have received various changes to fit the PVP nature of combat. All changes are assumed from their Level 6 counterparts in the main campaign, but they only apply to the PvP mode