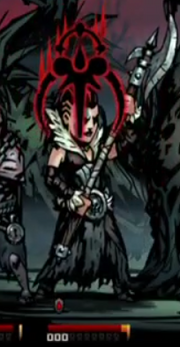 A Hellion becoming afflicted with the Crimson Curse.

"These swarming fiends carry a pernicious plague! A sickness so virulent, so insidiously, it is more a curse than a mere disease."

The Crimson Curse is a persistent status effect, much like a disease (but can't be cured by camping skill Leeches and Snuff Box), that gives a hero unique conditions. It is only found in the Crimson Court DLC.

The Curse is automatically removed from all heroes in your roster after slaying a Courtyard Boss. The ability to cure it through the Sanitarium will become permanently available eventually.

It's important to note that after completing the first Courtyard quest, subsequent runs require an Invitation to gain entry: as the Crimson Curse's Infestation grows, Bloodsuckers begin to spawn in every other location. When the Infestation reaches its peak, these random spawns will have a Gatekeeper carrying an Invitation.

Defeating said Gatekeeper will always grant the player one Invitation, but from the second round of combat, the monster can use "Elusive Exit" to escape, denying the player the Invitation drop.

Be wary, for the curse can spread while you're away from the Hamlet, and while in a dungeon, you may come across those who wish to end the curse by any means necessary.

Those who are cursed are immune to all Diseases, and all diseases they had before are cured.

Heroes that remain in the Hamlet when you set out on an Expedition will have the curse state progress by 30 rounds, even if you immediately return from the Expedition. They will also consume 1 vial of The Blood if any remains available in the Hamlet (Look at your provisions to see how many you have stockpiled from Expeditions).

The Crimson Curse is in its Passive state when first contracted, and returns to this state when the thirst is slaked. While in this state, heroes' stats change as follows:

If you give a hero 1 vial of The Blood while their curse is in the Passive state, they gain +7 DODGE and +3 SPD for 3 rounds.

Like hunger activations, eventually the cursed hero will get hungry and enter a state known as Craving. At this point, their condition gets worse:

Hereafter, you can either ignore their craving and deal with their urges or give them 1 vial of The Blood, sending them into Bloodlust. If you ignore them for too long, however, their condition will deteriorate in to the Wasting state.

As the voracious thirst for The Blood becomes crippling starvation, the hero starts Wasting away, bloodflies stalking their every move. Compared to the Craving status, they lose the SPD bonus and replace it with a SPD penalty with an additional penalty to Deathblow Resistance:

Past this point, if the hero does not receive 1 vial of The Blood before their next blood check, they will die.

If a Wasting hero is given 1 vial of The Blood, the Crimson Curse will return to its Passive state.

Heroes left in the Hamlet while Wasting will automatically consume 1 vial of The Blood from your Provisions instead of dying. If no vials of The Blood are left when the mission is finished, the hero perishes as normal. Look at your provisions to see how many you have stockpiled.

If a Craving hero is given 1 vial of The Blood they enter a euphoric state of mind called Bloodlust, granting buffs while also putting them into a state of unpredictability. Their stats change as follows:

If you give a hero an additional vial of The Blood while their curse is in Bloodlust state, they will receive massive (35-40) Stress Damage, but gain +50% DMG and +4 SPD for 3 rounds.

After a while, the Bloodlust will fade, returning the curse to its Passive state.

Below is a table showing what statuses each hero class inflicts on other heroes during Bloodlust.

*Deals higher damage than the others to his party members.

A Jester using The Cure.

Defeating Courtyard bosses will remove the Crimson Curse from all infected heroes in your roster. Note that this won't prevent future contagion when exchanging blows with Bloodsuckers.

The Fanatic will chase any infected hero. If killed, he will drop The Cure, which can remove the Crimson Curse. The Cure can only be used during a mission, so save it for after you have completed your quest if you want your character to have the best chance of avoiding re-infection via random encounters.

Upon completing the quest "A Bewitching Predator", an event called "Of curse and Countess" will trigger. The event removes the Crimson Curse from all affected heroes and enables active removal (like any normal disease) through the Sanitarium. But note that the Curse still cannot be removed with camping skills that cure diseases.

Curios that can cause Crimson Curse[edit]

Attacks that can cause Crimson Curse[edit]

Enemies or Curios that inflict random Diseases do not count as Crimson Curse adders.