This article is about the game. You might be looking for Darkest Dungeon (location).

Darkest Dungeon is a hard-core RPG about the stresses of dungeon crawling. You will lead a band of four Heroes on a perilous side-scrolling descent, dealing with a prodigious number of threats to their bodily health, and worse, a relentless assault on their mental fortitude! Five hundred feet below the earth you will not only fight unimaginable Foes, but famine, disease, and the stress of the ever-encroaching dark. Darkest Dungeon focuses on the humanity and psychological vulnerability of the heroes and asks: What emotional toll does a life of adventure take? 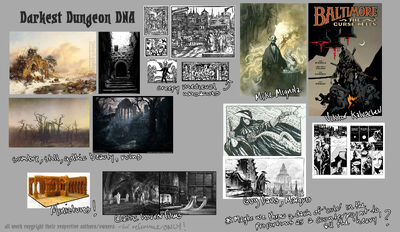 Sketches of inspirational elements during the design phase of Darkest Dungeon

Darkest Dungeon is characterised by its dark Gothic setting and atmosphere, strengthened by ominous cinematics and stressful gameplay accompanied by a ruthless Narrator.

In the world of Darkest Dungeon, corruption and monsters have escaped the forgotten darkness of the deep and have overrun the once idyllic Estate of the player's late Ancestor, a scion of an ancient noble family. As if being plagued by disease and misery wasn't enough, the people of the impoverished Hamlet must now withstand unthinkable nightmares roaming the land. The cause of this evil was the Ancestor himself, who meddled with dark forces in pursuit of immortality after a lifetime of perverse debauchery and unsealed a nightmarish power entombed far below his mansion. At last appalled by his actions and repentant, the Ancestor has ended his own life and bequeathed the Estate to the player, urging that they purge it of the slavering horrors that now roam freely. The player is not alone, however: news of the player's mission and the lost treasures of the Estate has traveled far and wide, piquing the interest of steadfast warriors, devotees of the arcane, and opportunistic rogues willing to brave the Estate's dungeons.

The following are the system requirements for Standard Edition:

The game has full audio, interface, and subtitles in English, and the interface and subtitles have been officially translated into the following other languages: