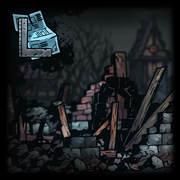 Districts are a special kind of town building available only in The Crimson Court and The Color of Madness DLCs.

Districts introduce a new layer to the depth of late-game planning for the player, as the available buildings are generally immensely expensive, but do offer substantial buffs if a player was so inclined to rebuild them. The benefits vary from exclusively utilitarian or financial incentives to direct combat benefits to the adventurers under the player's control. However, due to the immense cost of erecting District buildings, it becomes prudent for the player to plan long in advance, as a lot of these buildings will be especially useful if built as early as possible (e.g. Bank, Granary, Puppet Theatre, etc), while other buildings serve more of a final stepping stone to forming a perfect expedition into the depths of the Darkest Dungeon, offering powerful buffs to your combatants and improving their stats and abilities (and other gameplay aspects) beyond conventional means of training, equipment and trinkets.

It is important to note that Districts will be significantly easier to build if the player plays on a Difficulty setting without time limitations or other restrictions because a speed-run scenario or a run on Stygian difficulty will demand a lot more planning and prioritization to utilize Districts to their utmost potential.

To build one, you must have gotten the Town Event which can occur as early as week 7, a Blueprint (one of which is obtained for free from the event), and many, many Heirlooms. You are guaranteed to get the event in week 10 (or the first week after installing the DLC that doesn't conflict with other DLC town events), if you fail to meet the requirements to get it earlier, making it a reliable and consistent method of acquisition. Further acquisition of blueprints will require the player to hunt down veteran and champion Bosses, who will drop a Blueprint upon death. Mini-bosses, such as The Collector, The Shambler, or The Fanatic will not drop a Blueprint when defeated.


Since each new building in Districts requires a Blueprint, the player must choose very carefully which building he or she wants to erect next, as the acquisition of Blueprints can be quite an ordeal at the earlier stages of the game. It is important to note, however, building Districts is not a prerequisite to winning the game, thus can be completely neglected if so desired.


Some of the more unorthodox strategies involve building certain District buildings as soon as possible, to utilize their unique benefits.


For example, rushing the Bank will completely change the tempo of your game, making it very important to have a large capital at hand (as 5% of it will be returned to you as interest each week, making it an excellent source of income that can partially or completely push out other sources of income. Having 100,000 Gold will yield an extra 5000 gold weekly, while having 200.000 Gold to spare (returning 10.000 Gold/Week) will make it so that your expeditions are essentially financed by the interest rate received purely from your financial activities.


Focusing on building your Cartographer's Camp as early as possible, will dramatically change the usefulness of maintaining a high Light level, making it a powerful alternative to playing in utter Darkness. Doing so can significantly change the types of expeditions you are willing to send out, as playing with a high Light level is significantly more forgiving, but typically offers worse rewards, while Cartographer's Camp makes it a viable and profitable alternative to riskier darkness-centric gameplay.


The table below lists all of the currently available buildings that can be constructed within Hamlet's Districts, the cost of doing so and the benefits of each individual project.