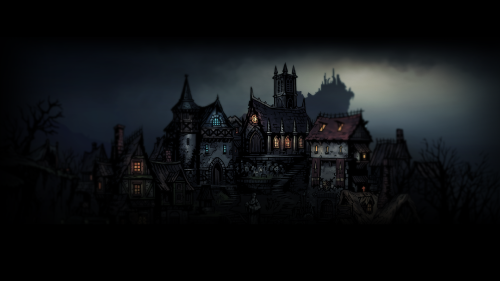 The Hamlet is the main hub of the game, accessed when not in a dungeon. The hamlet contains various buildings that allow the player to form, manage and improve a roster of adventurers to send into the various expeditions needed to reach and purge the Darkest Dungeon from the evil that has encroached it.

The music that plays within the Hamlet is also called The Hamlet.

One of the hamlet's uses is to relieve the heroes from the stress accumulated during expeditions. Two buildings are dedicated to this purpose: the Tavern, where heroes can drink, gamble or visit the brothel, and the Abbey, allowing heroes to meditate, pray or flagellate themselves. All such activities have a cost and varying degrees of effectiveness, as well as risks for the arising of quirks, often negative, but sometimes positive. Relieving stress also allows the heroes to get rid of afflictions. 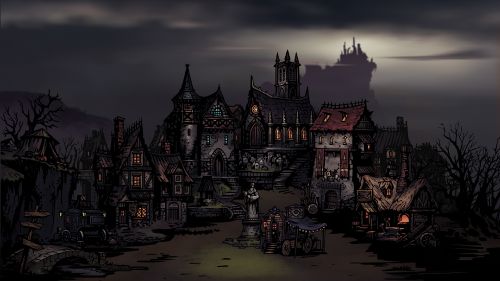 The Hamlet contains a variety of facilities with disparate purposes, most of which revolving around the management of heroes.

Most buildings can be upgraded through the use of heirlooms in order to unlock further benefits, make the facilities more efficient, and reduce the prices of their services. Each building consistently requires the same kinds of heirlooms, though the amount needed for each upgrade increases exponentially.

The Abbey allows the heroes to be relieved of the stress accumulated during expeditions. The Abbey and Tavern cost the same and relieve the same amount of stress, but the Abbey is less risky concerning possible negative side-effects and beneficial positive side-effects.

As for the Tavern, the abbey has three different floors with increasing effectiveness and costs, that must be upgraded separately by employing Busts and Crests.

The Ancestor has kept an attentive record of his terrible findings in the search for the Darkest Dungeon, and they can be reviewed here after being unlocked by slaying bosses. Found journal pages can also be viewed here.

At the Blacksmith, individual heroes' weapons and armor can be upgraded for a hefty fee, strengthening various aspects of the adventurer's defensive and offensive potential.

Upgrades for the Blacksmith can be used to reduce improvement costs or to unlock higher tiers of weapons and armors. Deeds and Crests are needed for any upgrade.

The Graveyard tracks every death occurred during expeditions, giving an insight on what killed the hero and when.

The Guild is used to upgrade individual heroes' combat abilities, allowing them to be more effective and reliable when fighting.

The Guild can be upgraded using Portraits and Crests to reduce ability improvement and teaching costs and to unlock higher ability levels.

The Nomad Wagon hosts a nomad woman who will sell different valuable trinkets each week for a steep price, in case the player is in need of specific equipment or has trouble finding good trinkets during expeditions.

The Nomad Wagon can be upgraded to either reduce trinket costs or increase the amount of available trinkets. Both upgrades cost a high amount of Crests.

At the Sanitarium, heroes can get rid of troublesome negative quirks, lock positive quirks in place to make them permanent, and treat the various maladies that can be contracted when exploring dungeons.

The Sanitarium can be upgraded to reduce quirk and disease treatment costs, to make the removal of additional diseases more likely, and to increase the number of available rooms. All such upgrades cost both Busts and Crests.

The Stage Coach is the place to visit to recruit new heroes for the Hamlet's roster, entirely free of charge. New and different recruits will be available each week.

It is possible to increase the number of adventurers available and the maximum number of heroes that the roster can host by upgrading the Stage Coach by spending Deeds and Crests. If the Guild and Blacksmith are properly upgraded, it is possible to increase the maximum Resolve level of available recruits by spending Busts and Portraits. Higher level heroes also have better Armor and Weapons, as well as upgraded Skills.

The Survivalist is a mysterious woman used to the rhythms of the wilds, who will teach camping skills to the heroes, provided a steep fee is paid in advance.

There is only one possible improvement route for the Survivalist, which reduces the training cost when teaching camping skills to heroes in exchange for a very high amount of Crests.

Like the Abbey, the Tavern allows the relief of accumulated stress for the heroes. It is often more prone than the Abbey to apply temporary negative conditions or quirks, but also have more positive results.

Each floor of the Tavern can be upgraded by using Portraits and Crests to increase efficiency and rooms, and decrease costs.

Unlike other buildings, which must be visited to use their resources, Districts apply passive benefits to the Hamlet, such as giving free items, increasing the effectiveness of the Torch, and giving heroes of specific classes permanent stat and/or skill bonuses. All districts require Blueprints to be built, which can only be found by a town event that occurs once and defeating Bosses that are Veteran level or higher.