Hunger is a game mechanic in Darkest Dungeon. 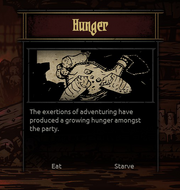 Hunger occurs every so often while you are in a Dungeon. When your characters are hungry, an alert will appear, which demands the player to choose whether the party will eat or not. There is no option to delay or skip.

This choice will have an immediate effect on your party.

Multiple Hunger events can occur in a single dungeon.

Hunger event tile visible only by cheating or eventually modding.

Hunger, like any other event (Fight, Obstacle, or Curio) is randomly generated on a dungeon cell in a corridor rather than randomly decided by the game at any given time. Unlike other events, it is never shown on the map (except for developers) even if the area is scouted. Reentering any previously entered hallway (even if not explored) has a chance to spawn a new hunger event. The chance depends on the Light Meter, where it is 7.5% (Radiant Light, Dim Light), 10% (Shadowy, Dark), or 12.5% (Black as Pitch). These numbers vary with difficulty (Stygian/Radiant/etc). [1]

When players enter an area, they start with a 2 hallway buffer before they start triggering hunger events. After encountering a hunger event, the players are also given a buffer (1 hallway trip) during which they will not trigger a hunger event even if such an event is present in a corridor. In case the event is not triggered, it will remain in place until the next time the player passes it.