Resolve Level governs the overall strength of heroes, increasing their resistances and allowing for improvements on their abilities and equipment.

Each resolve level increases hero chance to disarm traps and resistances to stun, blight, bleed, move and debuff by 10%. Resolve level also unlocks access to stronger equipment to be purchased at the Blacksmith and higher level abilities to be acquired at the Guild.

If a hero's resolve level is too low for an expedition, that hero gets additional stress on entering the dungeon (20 stress for every level of difference) and will take more stress damage than normal (+25% stress for every level of difference). While selecting heroes for a quest, any party member that's too low-level for the quest will warn the player of that penalty by expressing concern for their safety. Resolve level 0 heroes will always have this stress penalty on their first expedition, but will level up to resolve level 1 after any successfully completed expedition.

Additionally, the prices for stress relief activities or disease and quirk treatment at the Sanitarium in the Hamlet will increase with resolve levels (with prices being different between resolve levels 0-2, 3-4 and 5-6) 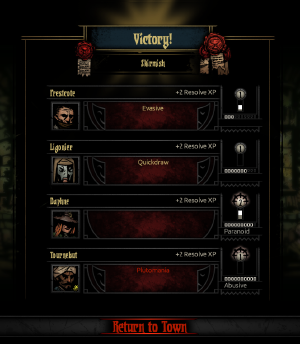 A newly leveled Occultist and Leper

Heroes will gain experience when successfully completing an expedition. Retreating from an expedition will never grant any experience to the surviving heroes, regardless of the amount of enemies slain or objectives partly completed.

Expeditions will reward higher amounts of Resolve Experience depending on their difficulty and length. Likewise, different Resolve Levels require increasing amounts of experience in order to pass on to the next level.

The Old Road gives 2 XP, the expedition of Wolves at the Door and all four quests in the Darkest Dungeon all reward with 16 XP.

For the Courtyard expeditions, the first one gives 4 XP, The Baron gives 8 XP, The Viscount gives 12 XP and The Countess gives 16 XP. Others are the same as general rule.

For the Farmstead expeditions, the first one gives 2 XP, The Miller gives 6 XP. For the Endless Harvest quest, it depends on the waves survived, the leave before finishing the first wave gives none, finishing the first meter on the top right gives 8 XP, the second gives 12 XP, the third gives 16 XP and the fourth and on all give 20 XP.