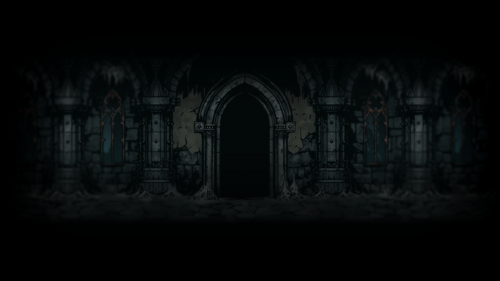 The Ruins is the first dungeon that can be explored. The former halls and seat of the Ancestor's power, the Ruins are now a black, shifting maze of corridors firmly under the control of the Necromancers and their continuously expanding undead army.

After the Ancestor's short-sighted revival of the powerful Necromancers, they moved into the Ruins that once housed your family’s lineage. There they desecrated the graves of soldiers and nobles alike, bringing them back as a mindless skeletal horde.

Characters reliant on doing Bleed damage are much less effective in Ruins than in other locations due to the presence of skeletons (which cannot bleed). Conversely, characters proficient with Blight attacks become extremely useful here as most enemies have very low blight resistance, and there are a few enemies with high PROT (less susceptible to regular direct damage, while remaining susceptible to Damage-Over-Time effects).

Crusader does really well in the Ruins due to the increased damage he deals to Unholy enemies, which are prevalent in this area. Grave Robber is fast enough to kill Bone Courtiers before they get a turn, preventing them from using their Stress-inducing attacks..

The Ruins is the easiest region to explore: skeletons don't have many special attacks, holy curios with positive effects are easy to come by, and urns, chests, and cabinets can provide some good loot. Bone Captain is weaker than his counterparts from other regions. It's also worth noting that the Ruins' traps only do regular and stress damage, with no DOT or debuff.

The general strategy is to kill stress/damage dealers in the back ranks first, then focus on enemies without PROT, leave Bone Rabble and Bone Defender for last, as they don't hit that hard. Pulling Bone Courtier or Bone Arbalist to the front rows as well as knocking Cultist Brawler back to 3/4 position can be a good idea: they will use weaker attacks to get back to their desired position. Alternatively, if your party has enough damage, speed, and stun ability, enemy groups with two Bone Courtiers and/or Bone Arbalists can be great opportunities for recuperation — by killing the two front-line enemies first (and removing their corpses) so that the Courtiers / Arbalists move into the first two rows, you can reduce the enemy force to two monsters that are stuck in rows where they deal very little melee damage and no stress damage outside of an infrequent critical hit, allowing you to stun or simply tank the negligible damage while restoring lost health and stress.

Things to watch out for[edit]