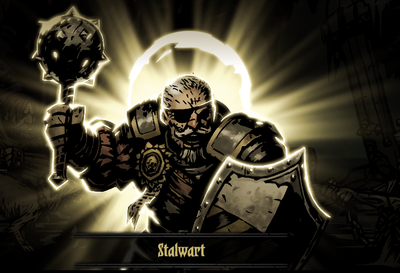 A Virtue is one of the states a hero can enter upon reaching 100 stress, the other being an Affliction. Virtuous heroes have increased stats and can randomly heal themselves, reduce stress of the party, or buff their teammates at the start of their turn. Becoming Virtuous reduces the stress of the entire party by a small amount, on top of immediately setting the Hero down to 45 Stress. Virtuous heroes can go over 100 Stress without effect - additionally, instead of suffering a heart attack at 200 Stress, they will lose their Virtue and be reset to 0 Stress. Virtues are also removed upon returning to the Hamlet.

The base chance to receive a Virtue instead of an Affliction is 25%. Heroes with a lower level than the dungeon they are in get a penalty of -5% Virtue Chance per level difference, except when the difference is 6 (i.e. level 0 characters in the Darkest Dungeon), where the penalty is -33%. There are also many trinkets that affect Virtue Chance, with the highest possible buff from these trinkets being +45% (giving a total 70% Virtue Chance), either from using both Hero's Ring (+25%) and Ancestor's Tentacle Idol (+20%), or the Highwayman's Crimson Court set

Virtuous heroes are protected from some events, most notably from being anchored by the Drowned Anchorman.

All Virtues increase Stun, Blight, Bleed, Disease, Debuff, and Move Resist by 25%. Since it is a shared attribute, it is not listed in the table below.

Possible actions on the start of a hero's turn, called "act-outs," cannot happen two times in a row for the same hero, and two different heroes cannot have act-outs occur back-to-back.

To encourage the use of Stress-based teams, all heroes in this game mode have a base Virtue chance of 0%, although this can still be raised through the use of Trinkets or buffs. Notably, the Crusader's modified Inspiring Cry can give a +15% Virtue chance for 5 turns, so there is a slight hope for a stressed hero to turn Virtuous and turn the tides of battle.

When a hero turns Virtuous here, their Stress goes down to 80 instead of 40, so it's still possible for a Stress-focused opponent to keep pushing the target to a heart attack. Virtuous heroes also can suffer from heart attacks like normal - they will retain their Virtue, but fall to Death's Door and have their stress reduced to 170.