Upon entering a battle, there is a chance to surprise enemies or be surprised by them. 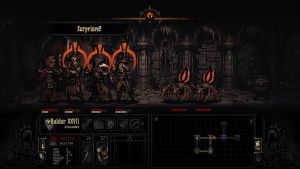 If your party is surprised, party members will be shuffled around, messing your formation. Escaping from battle becomes impossible for the first turn.

If you surprise enemies, they will go last on the first turn, allowing you to reliably plan actions.

The maximum surprise chance is 65% for both sides.

NOTE: While in the Darkest Dungeon and the Farmstead, it is impossible to be surprised or surprise your foes, rendering items that affect the surprise chance obsolete.

Dealing with being surprised[edit | edit source]

Surprising your enemy is very good: you will have 4 turns before they get to act. Being surprised, on the other hand, can be extremely bad: e.g. having the Leper in the 3rd rank and a Vestal in the 1st. It will take a few turns to get them back into optimal positions, prolonging the fight and taking extra damage.

Reduce the negative impact of being surprised by:

Please note that Ambush, Shambler and Fanatic will always surprise you no matter what, so rearranging your Heroes into positions they don't want to be in before interacting with them may be a good idea.