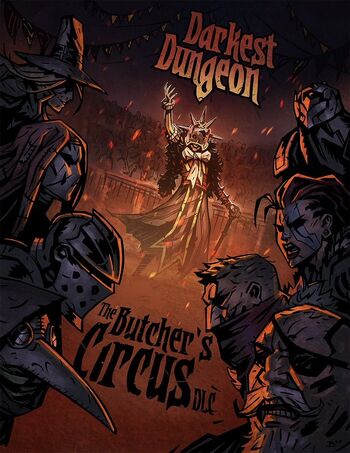 Announcement art for the Butcher's Circus

The Butcher's Circus is the fourth DLC for Darkest Dungeon. It was released for PC on May 28 2020[1]. Among other features, it will add a Player vs Player (PvP) mode to Darkest Dungeon.

The Hamlet may have fallen on hard times, but the creak of wagons and blare of abused trumpets signals a change in fortune for the bold and meek alike: the Circus is in town!

A weathered and bloodstained pavilion tent beckons, the Twins flank the flap, and a rheumy-eyed Barker announces:

"The Butcher demands a show!"

Parties will be limited to one of each hero class. The following heroes will be available in The Circus's party selection screen:

Heroes that will require DLC to unlock them: