From Darkest Dungeon Wiki
(Redirected from The Courtyard)
Jump to: navigation, search 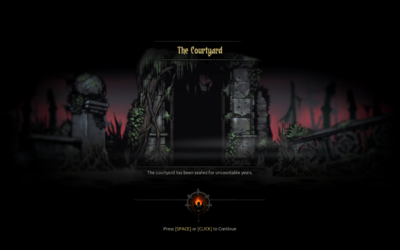 The Courtyard is a location added in the Crimson Court DLC - the former lavish gardens and vistas of the estate, fallen to ruin and overtaken by a terrible, bloody insect-borne infestation and its depraved victims.

The Courtyard also modifies gameplay for the rest of the game in several significant ways. Exploration into the Courtyard and encountering Bloodsucker enemies presents chances for members of your party to be infected with the Crimson Curse, a persistent and nigh-impossible to cure disease akin in several ways to vampirism. After the first time a hero is infected with the Curse, the Fanatic will appear in town, and from then on will stalk any party with a large number of infected Heroes in it.

Upon successful completion of the first Courtyard mission, Bloodsucker enemies will also begin to gradually appear in all other Locations in the game, a signifier of the spreading infestation. A new Infestation indicator will also appear on the left side of the Hamlet screen, which will indicate the current level of Infestation (Low, Moderate, or High), suggesting the approximate amount of Bloodsucker encounters that can be expected while exploring non-Courtyard Locations. Exploring any of the game's Locations will gradually increase the Infestation level. At High Infestation, Egg Sac curios will begin to appear in non-Courtyard locations, which when interacted with triggers an encounter with more Bloodsucker creatures.

The Courtyard itself maintains a persistent Torchlight level during exploration that is unique to this location, called Bloodlight. Bloodlight carries none of the effects of normal Torchlight (or lack thereof) and instead imposes a continual +Stress and -Bleed Resistance debuff. It also counts as 100% Light level, for the purposes of Quirk and Trinket effects. Instead of modifying the Light level, Torches grant a party-wide +3 ACC buff for 1 Battle, and find greater opportunities for use in Curio interactions while exploring.

The combat music that plays within the Courtyard is called Bloodletting of the Crimson Court or Bloodletting.

The Courtyard is similar to the unique dungeons encountered before, such as the Darkest Dungeon and the Vvulf Dungeon. As you progress through the Courtyard, more and more will be revealed through preset scouting, and if you do not know where you are going it is easy to become lost looking for the way forward.

Don't be fooled by the early appearance of the Courtyard. While its first quest is a short Novice-tier one, it serves as the introduction to the area, hosting deadly recurring enemies that will push your team to the limit and easily kill any weak heroes sent to the place. The rest of the Courtyard involves quests with a unique "Epic" length; they take place in dungeons are extremely long with dozens of rooms and corridors in a labyrinthine layout, and even have locked doors that require a key located in a distant location to open. You never enter the Courtyard with Firewood in tow; instead, you have to interact with certain curios to gain Firewood for camping.

Each venture into an Epic-length Courtyard quest consumes one Invitation, with each prior quest giving you a free one to start off. If you run out, you will need to find and kill Gatekeepers who randomly appear in Bloodsucker encounters in the other dungeons.

Because of the extreme prevalence of Bloodsucker type enemies, be prepared for any party member that goes inside to become inflicted with the Crimson Curse, if they haven't already. Bringing a reserve of The Blood is therefore a necessity, not only for Curios, but to assuage your heroes' cravings. While The Blood may be dropped by Bloodsuckers, it is not enough to sustain them for the long term, although abuse of Curios such as Throbbing Cocoons can force combat with Bloodsuckers. Also note that non-human wandering enemies may also be found within the Courtyard but will not drop The Blood.

Another threat the party faces is constant stress. For each square you travel through the Courtyard's winding corridors, one random hero will always receive 1 Stress point. This may not seem like much compared to the normal rate, but it can quickly accumulate over a long expedition. Add that to the constant stress damage dealt by many Bloodsuckers, and stress can quickly build out of control, something that can be catastrophic when facing the minibosses, or the bosses proper, inside the Courtyard.

Despite all of this, it is possible to return to the Courtyard at any time as the game automatically saves progress should you decide to retreat. Simply return later with a fresh party and the game will return you to exactly where you last left off. Unfortunately the game counts this as a defeat, with appropriate stress gains, and one week will advance, meaning that you must be prepared for the Hamlet to be exactly as you left it should you retreat early.

The lighting is considered above 75% for the purpose of Sun trinkets and quirks, so those items or attributes will always be beneficial throughout the quest.

The Bloodsucker type-enemies that infest the Courtyard are vulnerable to Bleed and resistant to Blight. Many also have strong defenses against stun while others are weak against stun (especially Sycophant and Chevalier). If a Bloodsucker is able to wound a party member with the attack "The Thirst", they will mutate into a second form with a different move set. Kills need to be quick as they will quickly heal themselves with "The Thirst" (and they tend to use it only when they lose some HP).

Bloodsuckers often have many ways to inflict Bleed on your party, but in turn are more vulnerable to Bleed than Blight. Bleed-inducing heroes like the Flagellant, Jester, Houndmaster, Hellion and Highwayman shine here, especially against high-PROT targets. A Plague Doctor can also function here by inflicting Bleed with her Incision skill and removing Bleed with Battlefield Medicine.

Because of the length of dungeon runs you want your teams to be self-sufficient with healing and Stress relief. Thus, the Jester, Houndmaster and Flagellant are good choices to bring for this purpose. For example, the Flagellant could move the party's stress onto himself with Endure while the Jester is also removing stress from the Flagellant with Inspiring Tune. This strategy is enough to hold an entire Courtyard quest.

It is risky to bring an Occultist as your main healer as the Bloodlight will make the bleed chance from Wyrd Reconstruction greater (+10%).

Several Bloodsucker enemies can afflict your party with the Crimson Curse, an affliction unlike any typical disease. It cannot be cured through conventional means and can cause erratic behavior among your party.