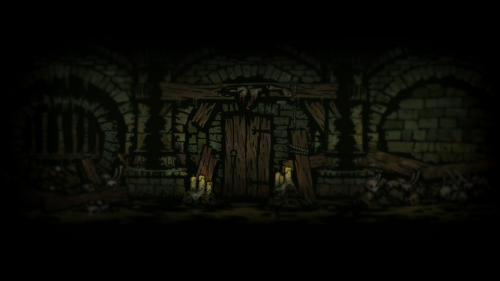 The Warrens is the third dungeon that can be explored. An incredibly ancient system of aqueducts and tunnels built for unknown purpose, it is now a corpse-choked cesspit that houses the ravenous, disease-ridden beast-men known as the Swinefolk, and all those deranged or monstrous enough to ally with them.

While the Ancestor was trying his hand at blood rituals, he used the ancient Warrens as a dumping grounds for his failures and underwhelming results. By the time the Heir arrives, the Warrens are now home to the descendants of those experiments called the swine, a warrior race of pig men whose only desire is to butcher and feed on any human they can get their claws on.

Because the Swinefolk are all hybrid Human/Beast monsters, the Bounty Hunter and Hound Master are helpful here, as well as trinkets that deal extra damage to Human and Beast foes.

Bleed attacks are extremely useful, blight less so due to high resistances. Any hero capable of stress relief is recommended as the Warrens have more dedicated stress-damage enemies than any other location. Heroes proficient in scouting and resistant to disease can be invaluable for reasons noted below. In terms of their defenses, enemies here tend to be highly resistant to blight, but still vulnerable to bleed. The most commonly encountered enemy type is Beast, with many of the enemies having a secondary Human typing.

It's also worth noting that due to the type of map layouts common here, scouting is more useful here than in other location (3x4 quadrilaterals can be almost fully scouted on first room entrance).

Great hero choices in this area include the Bounty Hunter and Houndmaster for their damage bonuses against the numerous Human and Beast type enemies. Both these heroes are also capable of inflicting bleed across the enemy party, and can benefit off each other's marking abilities. The Hellion and Flagellant are also frontliners of choice due to their bleeding attacks. The Jester can also be counted on for inflicting bleed to multiple enemies, if he's not busy buffing and relieving Stress. Since there are numerous ways to become Diseased here, a Plague Doctor is also handy for removing any diseases during an expedition.

In order to avoid Disease, it is typically best to kill smaller enemies quickly, as they are more likely to spread illness. Stress damage enemies such as the wretch and drummer should be dealt with swiftly as well. When dealing with the Swinetaur, it is wise to clear all other enemies first as this will force him to stay in the first rank where he can't use his strongest abilities.